I recall sitting in a café back in May this year sipping a macchiato and eating a flaky pastry. Early morning in Milan was a sight, and out of the window I remember seeing the Duomo cathedral rising majestically out of the central square.

The city was abuzz with renaissance architecture, innovation and of course style. But I wasn’t there just to enjoy the atmosphere, art and coffee, I was there to attend global food summit Seeds&Chips, notably one of the most comprehensive of it’s kind, with a  typical Seeds and Chips summit boasting 12,600 visitors, 350 media outlets, 350 companies and organisations, 300 speakers and 600 B2B meetings.

The summit will be in Australia for the first time in a few weeks (3-6 September 2019), as part of Global Table, and I find myself looking back to the Milan summit wondering how Australia’s contribution to these important discussions and sharing of ideas will unfold.

In anticipation of what’s to come at the gathering here in Australia, here’s my look back at the top 10 food innovations making waves at this year’s Seeds&Chips Milan May 2019.

The topic is a hot one this year, and with vegetarianism and veganism on the rise globally, driven by concerns over the environmental impact of meat consumption, a wide variatey of meat-replacement proteins are on show. The most prevelant are plant-based products, largely made from a range of pulses, grains and seeds. But compared to the vege burgers of old, which tasted like cardboard, the emphasis is now on taste and texture. There are a range of mince and even milk alternatives, and the vege jerky was truly delicious and convincing. A previous award winner at Seeds&Chips, Beyond Meat, has gone on to establish a highly successful plant-based protein source business, and recently raised quarter of a billion dollars to grow its line of plant-based meats, with shares rocketing in their public debut.

A variety of other protein sources were also on display including substitutes from fungus, bacteria, microalgae (spirulina) and also of course insects.

But there was also quite a bit of hype around these protein sources, and one company, Kiverdi, claims to produce protein from ‘thin air’, or Air Protein. Technically this is true as the protein is harvested from microbes which fix nitrogen out of the air and convert it into protein using the carbohydrate food source they are given.

Driven by a desire to reduce the amount of food wasted (currently about a third of all food produced), a number of innovations on show aim to practically reduce or reuse food waste. Marc Zornes, founder of Winnow, explained “we recognised that a lot of wood waste comes from the restaurant sector, so we developed a computer imaging system that automatically recognises and documents food waste as it is thrown into bins. This allow restaurants to optimise their purchasing and to reduce waste”.

Another innovation, and an award winner at this years event, was RiceHouse, which takes the waste and residue from rice (the second most consumed grain on the planet), and compacts it into solid blocks that can be used for building in developing countries.

A number of compostable containers were on show, aiming to reduce the amount of plastic being throwing away as single use wrappings or packaging. It turns out you can make biodegradable packaging from a large number of alternative sources, including bioplastics, corn and milk protein (casein). Even the water bottles we use during the week are fully compostable.

Interestingly there was a real push this year to raise the profile of some barely known superfoods, obviously buoyed by the recent success of quinoa and chia to picque global interest. Whilst hemp is an established superfood in some regions, a number of other less well-known foods are on show, including the mountain green cooking banana (or matooke) and baobab, the fruit of the iconic leafless trees from East Africa. As Sean Patrick and Nicol Nijsen from Gabanna, based in the Netherlands, explained enthusiastically ‘matooke is low carb, low GI, gluten free and high in protein, dietary fibre, antioxidants and potassium and magnesium. It is a very versatile food and can be made into a range of products including breakfast cereals and pasta, and buying matooke helps support farmers in East Africa’.

In fact many of these new super foods are sold on their good protein, vitamin and antioxidant profiles. But as Mike Lee from Alpha Food Labs said, ‘one of the best things we can all do is aim to consume one new food crop each week. This will diversify our diet, bringing new nutritional sources, but it will also help develop a number of these new superfoods into global products that in the end will help growers and producers in developing countries and help conserve the genetic resources of these under-utilised crops.

A number of apps were on show that aim to produce a tailor-made diet, menu and purchasing links according to input data on age, gender, lifestyle and health targets – nothing too new there.

An interesting new concept in food safety process has been developed by Julie and Paul Kos, a couple of true Aussie battlers from Geelong. ‘Orginally developed for the taste, we developed a cool smoking process for eggs which actually has the side effect of killing the bacteria in the eggs allowing them to have a shelf life of up to 12 weeks. This preservation method is now gathering global interest, and the eggs taste fantastic’.

Dan Crozier, a tall friendly queenslander and MD of SKG is looking at another natural food safety product. ‘Did you ever see that BBC documentary where doctors in Eastern Europe isolated viruses from river water to combat golden stafflocous infections in hospitals?  Well, a similar application of phage therapy has been developed at Wageningen University to combat food bourn infections such as salmonella, listeria and E. coli.’  So we are now using advanced biological warfare to keep food contamination free.’

But for me the focus on what was happening along the supply chain was most interesting. One French based start-up, Siga, has come up with a global standard to rate the amount of processing that had been used to produce your food. Where of course we should aim to consume less processed foods.

Another tech start up Copeeks, also from France, and also an award winner this year, has developed a computer imaging system that can automatically record the density of animals in a farm then use this information to calculate an animal welfare score. But as Julie Champion explained ‘the technology goes further, and we are able to identify happy animals, for example from tail waving, or stressed and aggressive animals, those that are inanimate or fighting. All this information is combined into our welfare algorithm which can then be accessed by the customer through our app. The information can also be used directly by the farmers to monitor their feed lots and improve the systems for these animals.’

Other apps are designed to note what was in your fridge, design an evening meal around it, and, if required, highlight what you’ll need to buy on the way home, or even order it for you, to make a full meal. These apps can also help reduce food waste by using up items in the fridge before they go off.

Our desire for an easier life is also catered for with a number of companies offering a complete meal in a bar or drink. A successful frech start up, Feed, has become an overnight success and has attracted major financing to build new factory facilities to produce its Feed bars and drinks. Although the end product was in some cases a bit dry, one nutrient bar can provide 400 calories and has a healthy balance of carbs, protein and monosaturated fats with vitamins and minerals – a complete meal in a bar – it is claimed. 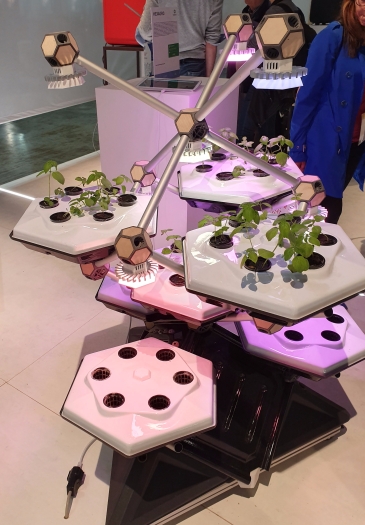 Mixartista for the home, making the perfect drink

Looking like something that you might see on a science fiction film set, a number of companies were selling plant chambers for growing herbs at home. Most with built in hydroponic and nutrient recycling systems and LED lights optimised for growth and taste.

Finally a number of appliances were on show to make life easier in the home, including pizza ovens, bread makers, craft beer brewing kits, and a terrace beehive, but perhaps my favourite was the robotic barman produced by Mixartista – serving the perfect gin and tonic every time.

Prof Andy Lowe is a British-Australian scientist and expert in plants and trees, particularly the management of genetic, biological and ecosystem resources. He has discovered lost forests, championed to eliminate illegally logged timber in global supply chains, served the United Nation’s Office of Drugs and Crime and is a lead author of the Intergovernmental Platform for Biodiversity and Ecosystem Services – Land Degradation and Restoration report. He has helped secure a quarter of a billion dollars worth of research funding in his field and is an experienced and respected executive leader, board member, as well as mid-career mentor. Andy has been the Scientist in Residence at The Australian Financial Review since August 2018. Andy is inaugural Director of Agrifood and Wine at the University of Adelaide serving as the external face for food industry and government sector partnerships across Australia, and the world. View more posts